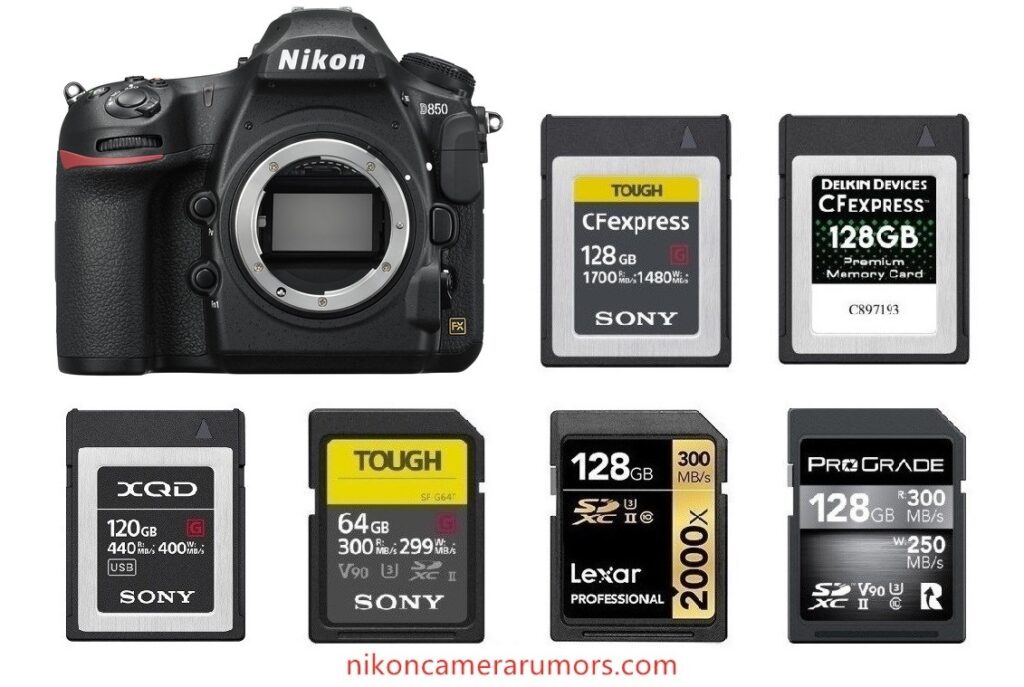 The Nikon D850 DSLR camera has two memory card slots: 1x CFexpress Type B / XQD card slot and 1x SD/SDHC/SDXC (UHS-II) card slot. And the Nikon D850 (Amazon, B&H, Adorama) comes with 45.7MP FX-Format Sensor, 4K UHD Video, 7fps burst and 8K time-lapse. As we all know, every second matters in photography, so a fast enough memory card is a must for serious photographers. So, buying a fast card is always worth it: Fast write speed provides fast buffer clearing time between burst shots optimizing your shooting experience. Fast read speed can let large files such as 4K video or a bunch of high-resolution images by continuous shooting transfer to PC in seconds. Reminder: if you plan to shoot videos, stick to 64GB (or larger) cards for the best video codex.

One of the Nikon D850 card slots supports the CFexpress Type B cards, which is currently the fastest and the most capable memory card format on the market.

Designed for strength, reliability and performance, Delkin Devices’ Power & Black CFexpress Cards boast read speeds of up to 1730 MB/s and write speeds of up to 1540 MB/s, making them perfect for raw and continuous-burst photography, 8K, 6K and 4K video at high bitrates and frame rates. For added peace of mind, the BLACK Series is covered by a limited lifetime warranty and 48-hour replacement guarantee upon registration with Delkin.

The Lexar DIAMOND Series Professional CFexpress Type B Card, boasting read speeds of up to 1900 MB/s, write speeds of up to 1700 MB/s and sustained write speeds of 1600 MB/s, is a formidable tool for capturing smooth raw 8K, 6K, and 4K video… but there’s a catch. Lexar has since been bought out by a Chinese company, raising questions about their reliability and performance – so although it’s a decent card, it’s one I’d be reluctant to recommend today. You’ll have to make the call yourself if you still want to get your hands on one.

In addition to the CFexpress cards, the Nikon D850 card slot 1 also supports the XQD cards. When it comes to XQD cards, your options are few. You can choose from the Sony G Series XQD Card, Delkin Devices Premium XQD Card and Nikon XQD Card. While Nikon has a 64GB XQD card, professionals favor the Sony and Delkin XQD cards – making them the best choice for photographers and videographers.

Boasting capacities of 32GB, 64GB, 120GB and 240GB, the Sony G Series XQD Card is a powerhouse when it comes to capturing 4K video and up to 200 continuous raw still image bursts, thanks to its blisteringly fast read and write speeds of up to 440 MB/s and 400 MB/s respectively. For those who need similar performance, the Delkin Devices Premium XQD Card is just as impressive, with the same read and write speeds as the Sony G Series, allowing you to record DCI 4K (4096 x 2160) and Full HD (1920 x 1080) video at up to 180 fps, as well as up to 200 continuous raw still image bursts.

The other Nikon D850 card slot is compatible with widely-used UHS-II SD cards. If you don’t often take photos with continuous bursts, I would highly recommend you to save your money and buy one of the faster SD cards. The Kingston Canvas React Plus cards offer almost the same level of performance as the Sony SF-G Tough cards but cost almost 40% less and even come in a 256GB size. Moreover, the new PNY X-PRO 90 UHS-II SD Card (V90) is also a great option for those looking for an affordable UHS-II SD card with excellent performance.