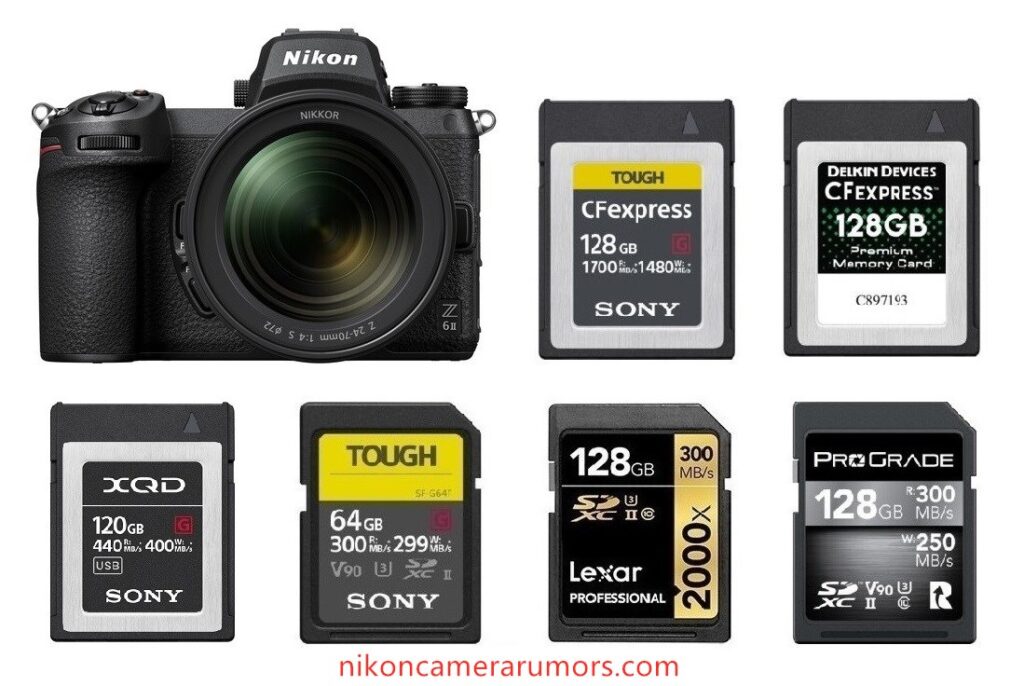 Below is our full list of top recommended CFexpress cards, XQD cards and UHS-II SD cards for the Nikon Z6 II mirrorless camera. Hope it can help you get the best out of your Nikon Z6 II camera.

The Nikon Z6 II card slot 1 supports the CFexpress (Type B) cards, which is currently the fastest and the most capable memory card format on the market.

Engineered for strength, dependability, and high performance, Delkin Devices Power & Black CFexpress Cards are a great choice for any photographer or filmmaker; offering read speeds of up to 1730 MB/s and write speeds of up to 1540 MB/s they can handle any type of raw and continuous-burst photography as well as 8K, 6K, and 4K video at high bitrates and frame rates. For extra reassurance, each BLACK Series Card is backed by a limited lifetime warranty and a 48-hour replacement guarantee when registered with Delkin.

The new Lexar DIAMOND Series Professional CFexpress Type B Card boasts an impressive array of speeds, with reads up to 1900 MB/s, writes up to 1700 MB/s, and minimum sustained write speeds of 1600 MB/s, enabling the smooth capture of 8K, 6K, and 4K video and beyond. However, following Lexar’s buyout by a Chinese company, the reliability and performance of their products are no longer what they used to be – I would find it difficult to recommend this card, but the decision is yours.

In addition to the CFexpress cards, the Nikon Z6 II card slot 1 also supports the XQD cards. When it comes to XQD cards, the options are limited – currently, you only have three to choose from: Sony G Series XQD Card, Delkin Devices Premium XQD Card, and Nikon XQD Card. Nikon released the XQD card in 64GB, but if you’re looking for a quality XQD card, we suggest you opt for the Sony G Series or Delkin Devices Premium XQD card – these two are preferred by experienced photographers and videographers.

The Nikon Z6 II card slot 2 is compatible with UHS-II SD memory cards. If you’re not into taking a lot of continuous shots, I’d highly recommend stashing away your cash and going for one of the quicker SD cards. The Kingston Canvas React Plus cards often provide the same level of performance as the Sony SF-G Tough cards, yet they’re roughly 40% cheaper and come in the 256GB size. Moreover, the PNY X-PRO 90 UHS-II SD Card (V90) is an excellent yet budget-friendly UHS-II SD card with terrific performance.