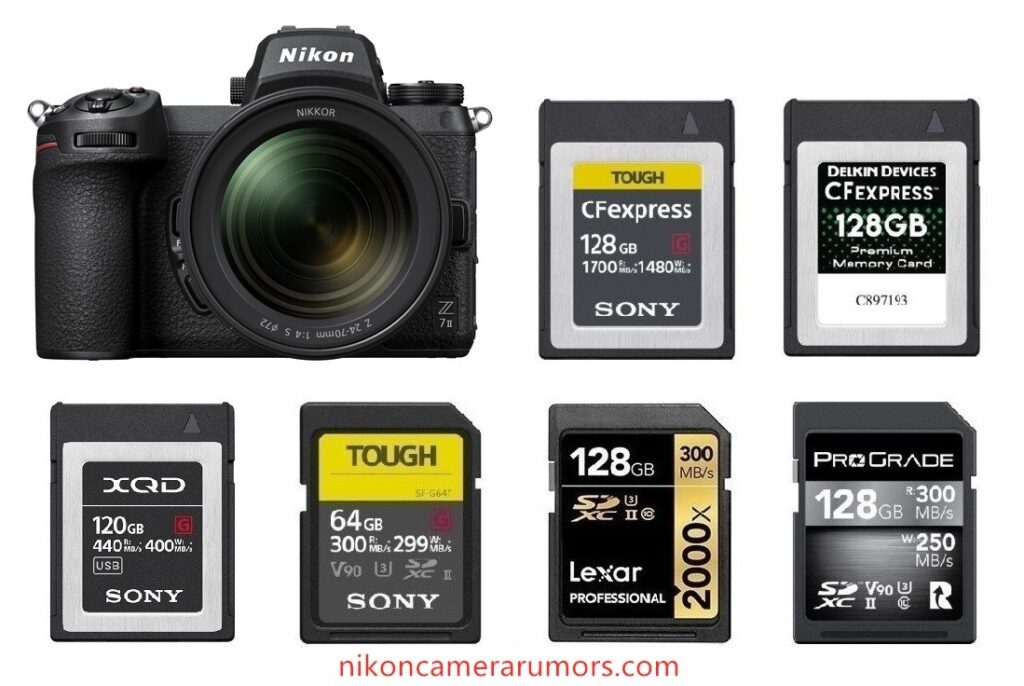 Below is our full list of top recommended UHS-II SD cards, CFexpress cards and XQD cards for the Nikon Z7 II mirrorless camera. Hope it can help you get the best out of your Nikon Z7 II camera.

One card slot of Nikon Z7 II is compatible with UHS-II SD cards. If you don’t take continuous shots often, I’d highly recommend you save your money and go for one of the faster SD cards. A great option is the Kingston Canvas React Plus, which offers the same performance as the Sony SF-G Tough, but costs 40% less and comes in a 256GB size. Another great choice is the PNY X-PRO 90 UHS-II SD Card (V90), a cost-effective UHS-II SD card with impressive performance.

The Sony SF-G Tough UHS-II SD Card (V90) is the speediest and most costly UHS-II SD card on the market, and you can’t go wrong with it. For those looking for something that won’t break the bank yet still provide speed and reliability, the ProGrade Digital UHS-II SDXC Card (V90) and the Delkin Devices Power UHS-II SDXC Card (V90) are two of the most popular cards on the market at a reasonable price. If you’re after an UHS-II SD card that won’t burn a hole in your pocket, these two are certainly worth considering.

The other card slot of the Nikon Z7 II supports the CFexpress (Type B) cards, which is currently the fastest and the most capable memory card format on the market.

Delkin Devices’ Power & Black CFexpress Cards are constructed to deliver strength, reliability, and stellar performance, offering read speeds of up to 1730 MB/s and write speeds of up to 1540 MB/s. Whether you’re capturing raw and continuous-burst photography, or shooting 8K, 6K, or 4K video at high bitrates and frame rates, these cards are ideal for the job. And for added assurance, Delkin offers a limited lifetime warranty and 48-hour replacement guarantee when you register with them.

The ProGrade Digital Cobalt & Gold CFexpress Cards and Sony TOUGH CFexpress Cards are truly top-notch – with read speeds up to 1700 MB/s and write speeds up to 1500 MB/s, you can quickly offload your content to your computer. Furthermore, the Cobalt’s write speed is guaranteed to never drop below 1400 MB/s – making them some of the speediest cards available on the market!

The Lexar DIAMOND Series Professional CFexpress Type B Card is touted for its read speeds of up to 1900 MB/s, write speeds of up to 1700 MB/s, and minimum sustained write speeds that won’t dip below 1600 MB/s – perfect for capturing pristine 8K, 6K, 4K and more video. However, since Lexar has been purchased by a Chinese company, its trustworthiness and performance have declined, making it difficult to recommend – but the choice is yours.

In addition to the CFexpress cards, the Nikon Z7 II also supports the XQD cards. When it comes to XQD cards, you have few options to choose from. The three main options available are Sony G Series XQD Card, Delkin Devices Premium XQD Card and Nikon XQD Card. The Nikon option is only available in 64GB, so we suggest sticking with the first two choices. The Sony G Series and Delkin Devices Premium XQD cards are among the most popular cards among professional photographers and videographers.