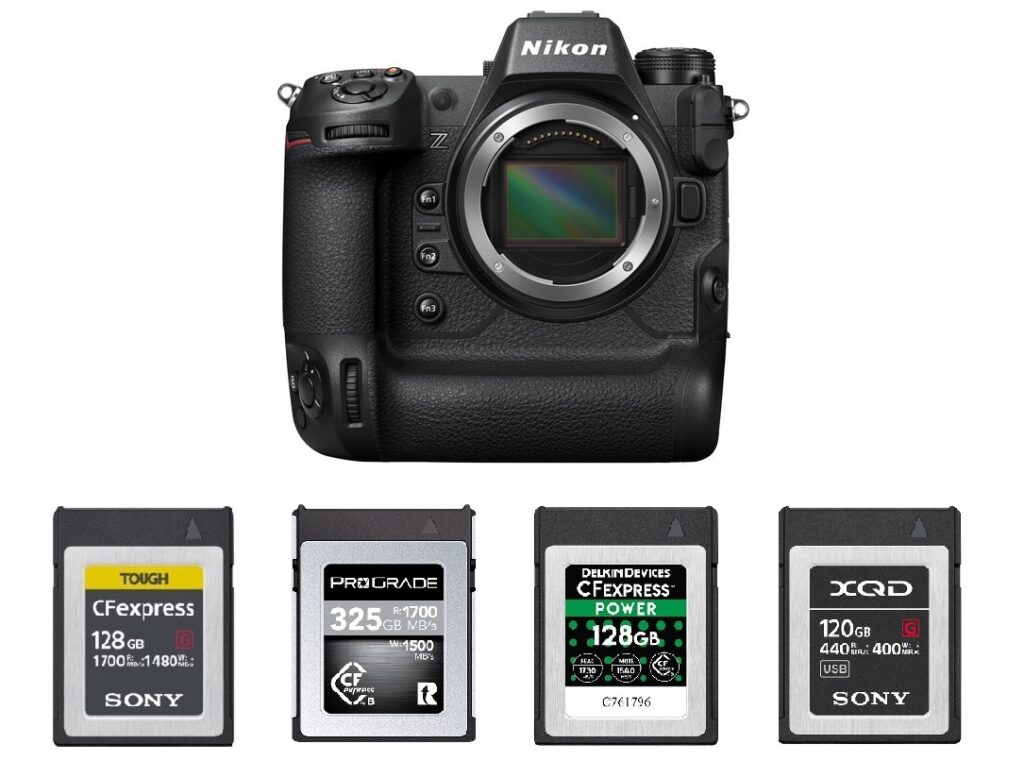 Here are the top recommended memory cards for Nikon Z9 mirrorless camera, including CFexpress cards (Type B) and XQD cards.

The Nikon Z9 has dual memory card slots that both support the fast CFexpress Type B cards and XQD cards for flexible and high-speed file storage. Featuring a newly developed 45.7 megapixel FX-format stacked CMOS sensor and next generation EXPEED 7 image processing engine, the Nikon Z9 (Amazon, B&H, Adorama) is capable of sustained fast continuous shooting of 20 fps when shooting in raw, 30 fps when shooting in JPEG, and an impressive 120 fps shooting rate when recording 11MP stills, with all rates supporting full AF/AE performance, as well as UHD 8K 30p video recording and 4K 120p for slow-motion playback. In addition, the Nikon Z9 features Nikon’s fastest, most sophisticated and reliable AF tracking performance ever, utilizing a new Subject Detection algorithm developed with deep learning technology, as well as 3D-tracking. So, delivering speed, image quality and connectivity, the Nikon Z9 is a perfect tool for photo and video creators looking to take their imaging to the next level.

Below is our full list of the best CFexpress cards (Type B) and XQD cards for the Nikon Z9 mirrorless camera. Hope it can help you get the best out of your Nikon Z9 camera.

Designed for capturing raw 8K, 6K, and 4K video, the ProGrade Digital Cobalt Series CFexpress Cards and the Delkin Devices POWER/BLACK CFexpress cards are super fast choices and they provide read speeds of up to 1730 MB/s and write speeds of up to 1540 MB/s, making them suitable for professional photographers and videographers. And, Offering fast read speeds up to 1700 MB/s along with write speeds up to 1480 MB/s, the Sony TOUGH CFexpress Type B Memory Card is one of fastest memory cards around, and it is ideal for recording a variety of video resolutions, bit-rates, and compressions, as well as uncompressed continuous RAW shooting of fast-moving action such as motorsports and wildlife. In addition, the SanDisk Extreme PRO CFexpress card is also one of the most popular choice if you like recording 8K & 4K videos and burst shooting. Below are the top recommended CFexpress Type B cards for Nikon Z9 mirrorless camera based on the speed and price, just get the one you like!

In addition to the CFexpress cards, both Nikon Z9 card slots also support the XQD memory cards. But when it comes to XQD cards, the choices are very limited. Currently, the Sony XQD G Series XQD Card, Delkin Devices Premium XQD Card and Nikon XQD Card are the top three choices for you.

Sony has pioneered the XQD format, and produces the best cards at the moment. Offering up to 440 MB/s read speeds and up to 400 MB/s write speeds, the Sony G Series XQD cards are the best choice and the most favorite among professional photographers, allowing it to record 4K video and up to 200 continuous raw still image bursts. In addition, the Delkin Devices Premium XQD Card is another great choice for professional photographers and videographers. Equipped with a PCIe 2.0 interface, XQD Format Version 2 compliance, and EB Stream functionality, this Premium XQD card features read speeds of up to 440 MB/s and write speeds of up to 400 MB/s, allowing it to record DCI 4K (4096 x 2160) and Full HD (1920 x 1080) video at up to 180 fps, and up to 200 continuous raw still image bursts. You can just choice the one you like.

Don’t own the Nikon Z9 yet? Just get it at Amazon, B&H, Adorama.